This was yet another Trek episode I was eagerly awaiting and I would argue is one of the most attractive concepts to come out of The Original Series: so much so, that it captured the imaginations of future generations of Trek writers, by creating an amazing playground to work in.

The premise: due to a transporter failure, Kirk, Uhura, Scotty, and Bones end up in a fascist mirror dimension’s version of the Enterprise.  Where Earth in an Empire and more importantly Spock has a beard.

(This is actually commented on an absurd amount: when Mirror Kirk arrives in our world and is being dragged to a jail cell he yells, “What is all this? What is with these uniforms?  Where is your beard? Where is my personal securty detail?!”  Yep, Spock’s beard takes precedence over a personal security detail.) 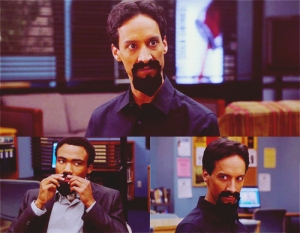 “Evil Troy and Evil Abed in the Trek-A-Day blog!”

So, bearded Spock aside, The Enterprise is a much more brutal place; the Federation logo is Earth with a sword through it, Sulu is pretty intent on sexually harassing Uhura, Checkov attempts a coup within the first few minutes, everyone does the Roman Centurion salute (a predecessor of the Nazi heil) and everyone on board gains rank through murder.  Kirk himself got his commission by murdering Captain Pike and obtaining a machine that lets him kill anyone on board the ship anytime.  Badass.  Our crew has to work quickly to get back to their own world, all the while playing the game of thrones with the new crew.  Eventually, Mirror Spock figures it out, but is convinced by Kirk to instead seize control of the Enterprise from Evil Kirk and begin a revolution (since a fascist, expansionist empire is unsustainable and thus illogical).  Cool.

But aside from the entertaining storyline, what we really get here is a fascinating character study.  While there is intrinsic fun in watching the cast play evil/alternate/robot versions of themselves, the real magic is in watching them play slightly altered versions.  Sulu is a ruthless careerman, playing by the strange rules of the universe but operating within his duty (twisted though it may be).  The harassment of Uhura is a bit out of step, unless we take the swashbuckler analysis from Spock back in The Naked Time and apply it here.  A good person with that attitude falls into a Three Muskateer vein, living with honour and integrity, whereas the darker side is a Don Juan, taking what he wants with a flourish.  It’s a neat take, and gives Sulu some much needed screen time.  Chekov, meanwhile gets his chance to be the evil Russian.  “Calm down, conservative US audience base of the 1960s!  The Russians can still be bad guys!  Only Chekov isn’t, in our world.  But here’s that thing you expect and kinda demand.  Got it?  Cool, let’s move along.”  (I can’t tell whether this was really a nationality-based or rank based choice, as an ensign would naturally want to advance through treachery, but it makes sense to me that it might have been a sign of the times; like how we still need evil Russians in spy movies…or video games, like both Call of Duty and Red Alert)

We also get to see an extraordinarily similar Spock, which is an awesome choice.  I mean, he DOES have a beard, which is different.  But his behaviour, though much more viscious, is still logical in its execution (part of the reason why Kirk can reach him) to the point that Bones risks staying in the Mirror Universe to save Mirror Spock because he reminds him so much of his friend.  We also see Kirk get his first, real lothario moment with Mirror Kirk’s ambitious ladyfriend…where Kirk basically shrugs and romances her for a bit.  Because he can.  His meeting of the regular universe version of her at the end is a neat touch as he clearly retained the feelings for her though she’s never met him.

It’s also a neat episode because EVERYONE gets some time to shine.  Uhura kicks a tonne of ass in this episode, from fending off Sulu with a knife, to disarming Mirror Kirk’s lady in the grand finale (a classic “take me with you” stick up).  Scotty gets to rock some hardcore science (yeah!), McCoy gets to ruminate on human life (yeah!), Spock gets to be the least altered (aside from the beard) and thus the most interesting as all his changes are subtle, Sulu gets to be an evil sketchbag, Chekov gets to be an evil Russian, and Kirk gets some love as well as engaging Spock in some good ol’ fashioned impassioned logic speeches.

There’s also a nice touch about the Mirror Kirk, Uhura, Bones, and Scotty’s quick imprisonment (we get one scene where Spock bascially has them arrested, labels them “fascinating” and walks away.)  Namely, that it is easy for civilized people to feign barbariansim, but almost impossible for barbarians to feign civilization.  It’s a good point and well used, as the raving, evil Kirk is clearly both raving and evil.  I’d have caught them too (plus they presumably learned their lesson after the LAST time there was a teleporter problem involving the captain…)

By clearly establishing this harsh Mirror Universe that runs parallel to ours, Trek opened quite a few doors.  Various episodes (and books; the only Next Generation book I ever bought was the Mirror, Mirror book about Picard.  Which I now intend to read) either touch on this universe or create a new one, but now have the freedom to (for better or often worse) play with alternate dimensions.  And most significantly for the modern Star Trek fan, this episode clarifies J.J. Abram’s intent quite a bit: I remember as I watched the film (which I quite like) that part of my brain was struggling with the whole “wait, if the timeline is changed, how does this affect my Next Generation?” But Abrams and Co. never intended to erase the universe (Spock mentions this a bunch in the film) but rather explore a new parallel version (which I wholeheartedly support).  Much like time travel, there are some terrible alternate reality episodes to come; but when done like this they’re a brilliant way to explore sides of the heroes we don’t get to see.