First, a confession: I wasn’t blown away by this episode.  The concept at work is really neat and the point does manage to come through, but there’s a lot of stuff surrounding it that has been done better in previous episodes.

Kirk and Co transport down to an Eden-like planet with more red-shirts that normal, who all quickly die in horrific ways (except for the token “near the end of the episode” guy…who dies near the end of the episode, as his name suggests.)  For some reason, this triggers huge panic in Kirk, who takes to questioning his own command a bunch.  It’s a valid reaction to the loss of members of his crew, but comes on pretty strong here.  Eventually they find a bunch of Oompa Loompa looking fellows who serve the machine Vaal, a giant paper mache serpent’s head that was either stolen from COBRA or Hogwarts’ Chamber of Secrets.  Either way, not the most impressive enemy to date.  (Nor is it ever really explained…) 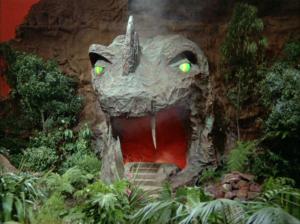 So, the oompa loompas feed this thing and it controls the weather, food, and keeps them immortal.  Consequently, they all live in blissful ignorance of everything, including sex and violence…so, in true blatantly disregarding the Prime Directive style, the crew introduces the aliens to sex…when Mr. Chekov makes out with a lady.

This greatly angers Vaal, who sends the aliens to kill the crew (thus inventing violence).  This in turn leads to a massive, species-wide ass-kicking (with Chekov’s lady friend wrecking several of them and Kirk inexplicably rolling at their feet to knock them over) and then they manage to drain Vaal’s energy enough to blow him up.  And then Apollo-oh, wait.  Sorry, got my “omnipotent-being-that-has-limited-power-that-can-be-destroyed-by-overloading-said-power-through-trickery-long-enough-for-The Enterprise-to-blow-it-to-hell-with-orbital-weapons” episodes confused for a second there.  My bad.

And with Vaal dead, the aliens are left to their own devices “wink wink” that thing called freedom.  Which Kirk insists they’ll like.

Kudos go out to Mr. Spock for repeatedly pointing out that all of this is in direct violation of the Prime Directive.  Like, a lot.

And special thanks to Bones for getting a good hearty laugh out of me with his observation upon learning the aliens don’t have a conception of sex:

McCoy FTW.  This episode…not so much.