This one is a tonne of fun, packed full of wacky hijinks, screaming Kirk, and Spock almost gets laid by a Romulan commander.  Good times.

Under super top secret orders, Kirk feigns exhaustion and irritation (laying groundwork for accusations of acting as a maverick to protect the Federation from war), Kirk invades the Neutral Zone and gets beamed aboard a Romulan vessel.  Spock is a surprise to the lady commander, who didn’t know tall, dark Vulcans worked on the Enterprise.  She immediately sets her sights on him and the Enterprise, while Kirk is to stand trial for breaking the peace.  This all turns out to be a ruse to get Spock closer to the commander; to this end he fake kills Kirk with a non-existent “Vulcan Death Grip” (not to be confused with the Vulcan nerve pinch).

Then things get wacky.  Spock attempts to seduce the commander (and succeeds in spades) and Kirk gets surgery to look like a Romulan. 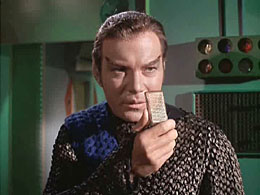 Together, they pull off an epic scheme to steal the secret Romulan cloaking device aboard the ship and everyone walks away a winner (aside from Spock, who is kinda bummed that he didn’t get some…and the Romulans, who lose lots.)

It’s a packed episode, but a good one.  Romulan Kirk is silly, Kirk being a dick to the crew is fun, and who can resist the charms of Mr. Spock?  It’s fun watching his very logical game at work.  Just an enjoyable space romp making good use of the characters and the political atmosphere of the series.