← Resident Evil Extinction vs Afterlife: It Was the Best of Times, It Was the Blurst of Times…
Dispatches from Nerdvana: Wha Happen at Fan Expo →

Resident Evil Retribution opens with one of my favourite Simpsons tropes of all time:

We get the longest “My name is Alice” spiel ever, as Milla Jovovich troopers through the entire twisted Resident Evil film continuity to-date.  For a continuity nerd like me, this is appreciated but needless, however it did highlight something kinda important about this series: The original Resident Evil film debuted eleven years ago, in 2002.  It’s a testament both the Milla Jovovich’s charisma, the zombie genre, and Japan’s continued interest in the franchise that these films are still being made. 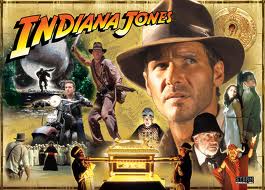 Yep, there are more movies in this franchise than in Indiana Jones.  Look on my works ye mighty and despair.

And thus, a clip show is entirely necessary for bringing us up to speed before launching into the penultimate (and fifth) film in the series…while the film is certainly leagues better than Resident Evil Afterlife (not a terribly high benchmark…), the question remains: how does it link-up to the abysmal Resident Evil 6?

Well, that’s the weird part: 11 years in, the film’s focus has turned its eyes away from the games and inward toward itself; a zombie snake eating its own tale (or an ouroboros, for those supernerds in the house).  Much like with Resident Evil Extinction, this is actually a good thing, as the films have created their own mythology over the years which is just as complex and absurd as the games that inspired them.  By focusing inward, we get a better movie more consistent with the film universe and thus more rewarding as a viewing audience.

Now, we aren’t entirely free of video game insertions.  Not by a long shot.  But ever since Resident Evil Apocalypse, the games and movies have had a tenuous relationship at best, often just shoe-horning in name characters for the sake of ‘the fans,’ leading to the horrendously non-nonsensical Resident Evil Afterlife.  This is still present in Retribution (adding Leon S. Kennedy, Ada Wong, and Barry Burton into the mix), but their introduction is plot based-ish rather than “Hey, we have Chris Redfield in a jail cell for some reason.  Look, a 3D effect!” Also, we don’t get the weird antagonistic ‘our characters are better!’ attitude of Resident Evil Apocalypse, instead we get game characters in the place of random commandos, which works just fine.

Now, given that likely few-to-none of you saw the film (I didn’t) let’s take a quick look at what this damn movie is about:

Retribution opens with a stylish backward action sequence (which is one of the first interesting visual ideas presented in the series in some time), picking up immediately after the ending of Afterlife with the entirely unmotivated assault on the remainsof humanity by Umbrella because sure-why-not.  It’s a quick palette cleanser to kill off Chris and Claire and all the other people we don’t want to pay anymore before we’re off to a neat little sequence in a house, which highlights a key problem in a 5-film continuous zombie franchise: if you declare Earth extinct and overrun in the third film, you’re going to have a bad time. 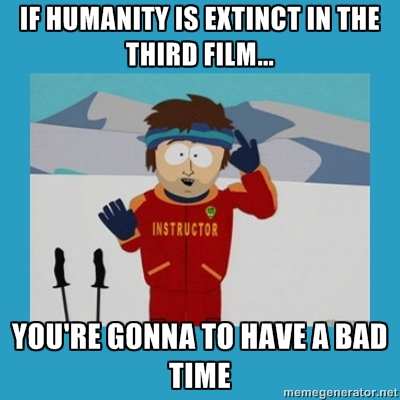 So, we jump back to pre-infection, with Alice married to Carlos and yet another kid-to-protect-for-a-film daughter (who is deaf!  Instant character depth!).  Naturally: zombies happen.  And we get a brief pre-infection sequence, which reads a lot like the flash-sideways sequences late in LOST, where we see familiar figures from throughout the franchise exhibiting strange behavior. 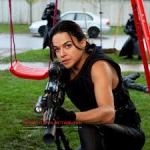 Well, it quickly ends in death and sadness, before we get our obligatory ‘Alice in skimpy medical scrubs in giant Umbrella room’ sequence, where brainwashed via “Resident Evil 5 chest scarab” Jill Valentine delivers lines like a speak-and-spell.  We discover we’re in an Umbrella facility full of clones and simulations (hence that weird ‘Japan outbreak’ at the beginning of Extinction) that Umbrella has been using to build weapons.  Okay, so to recap: clones.  Every fucking character we’ve ever liked who worked for Umbrella had tonnes of clones around.  We’re talking ‘that door room from Monsters, Inc‘ numbers of clones.

Alice and Ada (who is a generic super soldiery type) have to fight their way through various locations around the world (in the underground facility) to meet up with an extraction team (of familiar movie and game characters).  Along the way, they end up fighting all our favourites: Michelle Rodriguez (back from the dead, just like Fast and the Furious 6!), the captain from the first one who got laser walled (the excellent and highly underrated Colin Salmon), and of course Carlos ‘That Guy From the Mummy!’ Alvarez (we’re missing Lane Pryce and Jorah Mormont…but what’re you gonna do…) It’s actually a really fun conceit and all the video game characters actually make sense in this one (and act like themselves).  We also get our first on-screen kill of a video game character (sorry Barry.) 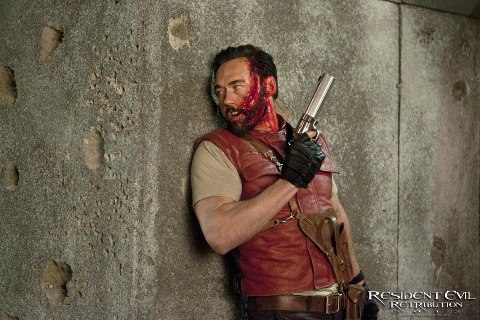 He was infuriatingly close to saying ‘Jill sandwich’ but didn’t. FAIL!

Gamewise, the added characters of Leon (Resident Evil 2, 4, 6) and Ada (2, 4, 6) are two of the 7 main characters of RE6 (you read that right. 7.) so we have our obligatory connection, we get a locational similarity (RE6 was very globe-trotty, the tagline of Retribution was ‘Evil goes global’) and frankly, that’s all we want.  I never wanted to see Las Plagus (explained as a mutation.  Sure.) or the nail-headed guy (explained as a bioweapon.  Sure, I guess.) but seeing a couple of familiar faces instead of randoms?  Cool.  Other than that, we’ve got a movie about the movies and a game about the games (sort of).

And this makes me very happy.

As I stated above, the inclusion of video game storylines like Nemesis has been consistently frustrating, but here the most references we get are to the earlier films and it’s a lot of fun having them back.  The main enemy is the Licker, the Red Queen computer has decided to KILL ALL HUMANS, Michelle Rodriquez is back being awesome.  And most importantly, it honours the fans of it’s own series, not the games that spawned it.

Yet again, the film succeeds by giving us the ‘twist ending’ of Alice arriving in Washington (Wesker is still alive for some reason) and learns that former ‘KILL ALL HUMANS’ Wesker now wants to save all humans, makes Alice magic again, and ends with a Helms Deep-esque seige of the White House.

Fuck it, why not. 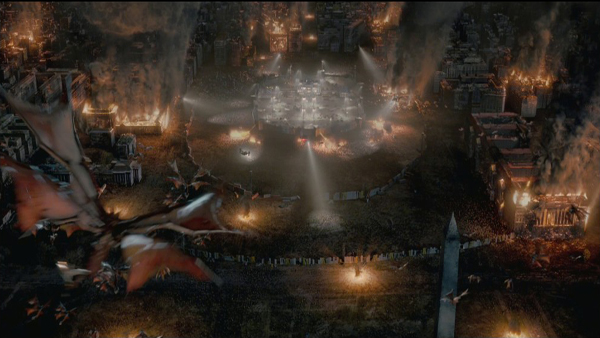 Word to the wise: don’t get the elven master archer to shoot the bomb guy.  Despite that shield-surfing thing a few minutes ago, he will totally fail now that it matters.

It’s not a great film by any stretch, but it evokes my favorite elements of many of the previous ones (especially the first) and has pointed to an actual series ending, which we need after 11 years.

So, yet again, the quest continues.  By the next film, Resident Evil 7 will be upon us and we can put this article to bed once and for all.  But in the meantime, I’m happy to say the films have finally come into their own (again) and the film franchise might get the ending its fans deserve.

And after 11 years, they deserve one hell of one.

It’ll probably have a laser hallway. 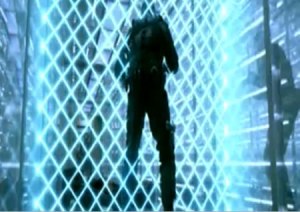 Posted on May 22, 2013, in Modern Mythology, Wha Happen'd at the Movies?!. Bookmark the permalink. Leave a comment.

← Resident Evil Extinction vs Afterlife: It Was the Best of Times, It Was the Blurst of Times…
Dispatches from Nerdvana: Wha Happen at Fan Expo →